Kansas City, Missouri Wildlife Command Center is strategically located in the southern portion of Kansas City, Missouri just north of Hickman Mills. Conveniently located close to I-435 West, I-435 North allows the operators to quickly access the freeway systems to get to any area of the city. Kansas City, Kansas is also serviced by this location, as well as Topeka, Kansas and St Joseph, Missouri. Of course, all the areas associated with the Greater Kansas City Metro Area are serviced by Wildlife Command Center of Kansas City.
Kansas City, Missouri is home to 38 species of snake, 7 of these species are venomous. The venomous species found in Missouri consist of: Osage copperheads, southern copperheads, western cottonmouths, western pygmy rattlesnake, eastern massasauga rattlesnake (now extinct in MO), prairie massasauga rattlesnake and timber rattlesnakes. There are only two species of venomous snake within the Kansas City area, the Osage copperhead, and possibly timber rattlesnakes. Timbers used to be found across the entire state but their numbers are severely declining. Therefore, the chances of finding one are low. This means the only venomous snake in this area likely to be found are Osage copperheads. They are secretive snakes and aren’t often found in homes but they can be found occasionally in homes and certainly outside in unkempt brush or yards.

The most common species of snake in Kansas City, particularly to make a home invasion, is the western rat snake. This species is non-venomous and as its name suggests eats a diet comprised heavily of rodents. This diet is what often leads snakes into a person’s home, they enter following rodents. During the cooler month’s snakes, may also use garages or crawlspaces as hibernacula (a place to hibernate) as well however. Wildlife Command Center has technicians which are trained in the proper identification and handling of all kinds of snakes, this includes trapping, removing, and identifying potential entry points for the animals Kansas City, Missouri. This will also include, usually, the discovery of a potential rodent issue and steps that can be taken to medicate this problem as well. Our snake service comes packaged with an inspection of the entire property which includes a search and capture of any snakes found, removal of any remaining hidden animals with a lure based trapping program, and the laying down of a prevention barrier after trapping. The inspection comes with a full report on how and where the animals are entering the home and what can be done and what it would cost for us to make all repairs to prevent future entry.

Kansas City is also host to pigeons and other invasive species of birds, such as starlings, can become a nuisance to commercial buildings and businesses. Pigeon populations can quickly grow out of control if not taken care of. Pigeons and starlings cause problems wherever they roost or nest Kansas City, Missouri. One of the main concerns is the fecal matter buildup created by pigeons, starlings and house sparrows. Their droppings can cover walls, signs and accumulate on walkways. Fecal matter build up is also a health concern because it can harbor the fungus that causes histoplasmosis. This is not something you want employees, customers or yourself tracking into the building.

Wildlife Command Center Kansas City, Missouri
Wildlife Command Center offers a variety of solutions to resolve your bird problem. In addition to trapping, we specialize in Falconry based bird abatement. Our team consists of experienced technicians that practice falconry and the natural predator of the birds that are causing the issue. We use both trained falcons and hawks to help reduce and eliminate the population quickly and effectively. Bird trapping and falconry based bird abatement help eliminate the overpopulation, but we also offer solutions to be sure the birds don’t come back following our success. Wildlife Command Center has technicians trained for installing bird proof netting to ensure that birds will no longer have access to the areas they were previously roosting.

Following the removal of the pigeons, Wildlife Command Center offers the cleanup of fecal matter and nesting material Kansas City, Missouri. We can remove nesting material from signs and other locations once the birds have left. Our technicians remove the source of the fungus that causes histoplasmosis by cleaning up the built-up bird droppings. We also deodorize and sanitize the contaminated areas following the removal of any fecal matter left by pigeons or other birds. Wildlife Command Center provides complete resolution for all bird problems. 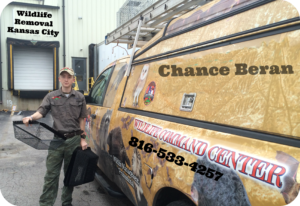 Kansas City Bat Removal
There are 14 species of bat which are native to Missouri for part, or most of the year. Bats serve multiple ecological purposes. Although no bats in Missouri eat fruit, there are several frugivorous bats throughout the world and they play a very important part in seed dispersal for many plants. There are also bats which feed extensively on nectar, again none of which are found in Kansas City, and these bats play a very important part in the pollination of some plants, many of which are used by people such as avocados and bananas. Finally, insect eating bats, which includes all species native to Missouri, help control populations of nocturnal insects which can lead to human disease, annoyance or are a pest to agriculture. Due to the important role that bats play, and their declining numbers throughout the country, they are protected by federal and state law in many cases. For this reason, they are unable to be harmed in any manner and require strict methods for removal to allow preservation of the animals.

Technicians are trained in the proper methods for removal, exclusion, and bat proofing by the National Wildlife Control Association. Our methods for dealing with these animals involves a thorough inspection of the entire home structure to determine how the bats are entering and where they are roosting and about how many bats may be using the structure as a home. From there we can generate a quote on what it would cost to completely solve the issue by excluding the bats and sealing all bat accessible areas on the home to prevent any further entry. We are also qualified to perform any cleanup that may be needed in certain circumstances where bat guano has built up within the home.