Soulful black eyes gaze up by rotating his little feathered head as the man approaches. The baby owlet’s yellow beak clicks as it turns its head quizzedly while Michael Beran, the owner operator of Wildlife Command Center, bends over and scoops up the tiny fluff ball. The tiny owlet was found in a corner in the backyard by a fence. “This is a bitty baby,” Beran said holding the owlet carefully.

On a recent service call at night, Beran was responding to a Raptor Rescue, Inc. call in St. Louis, Missouri about a little owl that kept showing up on a family’s backyard deck for two days in a row. The family members were concerned a big dog would injure the baby owl.

“The big dog would have made him into a chew toy. He looks like a stuffed toy, like something from Walmart with which you would play. It is total cuteness,” Beran said about the tiny raptor. Suddenly, the owlet shrieks a hissing slurping sound calling for his parent. Several dogs in the area start barking. But the owlet stays still resting in Beran’s hand. It is Beran’s more than 40-years of experience working with wildlife that enables him to exude assurance that calms the owlet.

“Our main goal with this rescue is to make sure this owlet stays safe. It has some bruising on the side of its face. He fell out of his nest. So, he might have hit his face on a tree limb as he was tumbling down,” Beran noted, as he closely examines the owlet. He determines the owlet is a baby Barred Owl, which are known for their distinctive brown and
white striped plumage. The owlet does not have any broken bones, but Beran decides to rescue the owlet and to take it to a sanctuary to be taught how to hunt and fly. 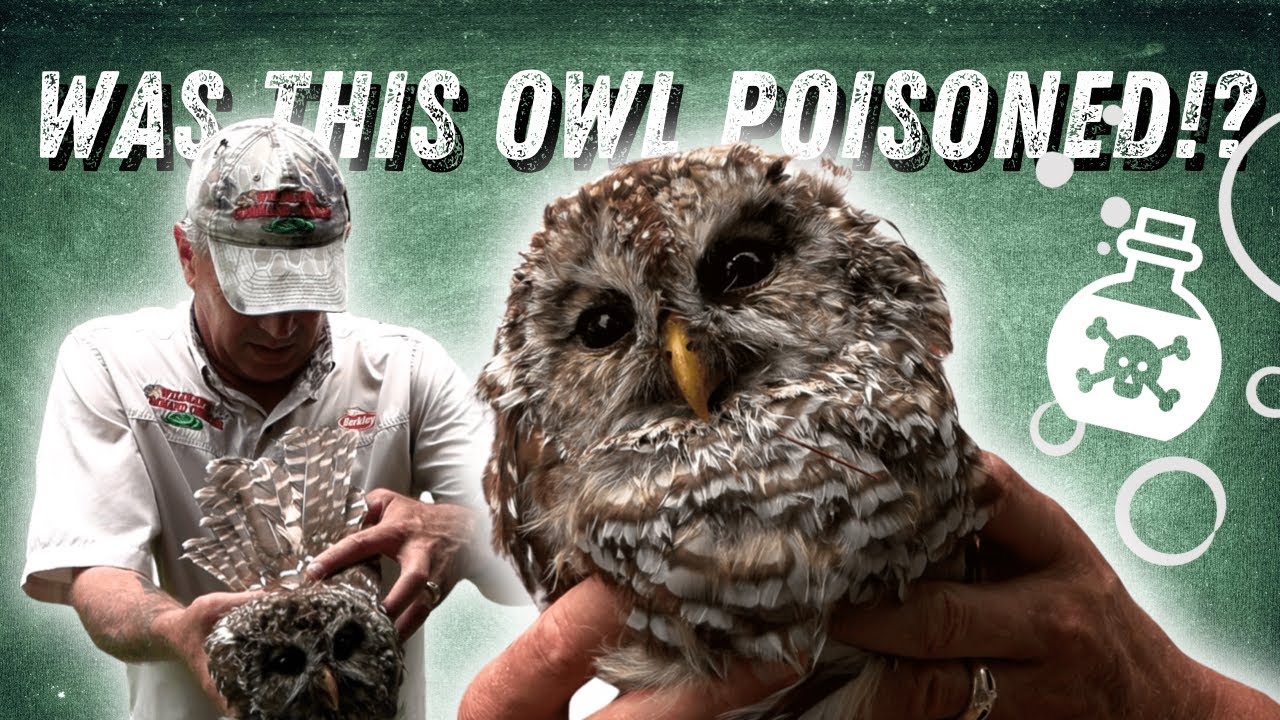 “Baby owls hatch out in February. They are of the age now where they jump out of their nests but cannot fly. Once baby owls come out of the tree completely and do not stay up in the tree where they are safe up in the branches, something clicks inside their brains, and they are not-in-the stay-in-the-tree mode. Like this little guy was on the deck furniture for two days,” Beran said, adding that if he did not take the owlet to a sanctuary, a dog might attack it since it will not stay in the tree.

The Barred Owlet will be placed in a flight pen and be taught how to hunt in the wild. If just left to fend for itself, the baby owlet probably would not survive. Birds of prey have a high mortality rate. About 85 percent of all eggs laid every year die. Only 15 percent make it to adulthood. After the first
year, 50 percent of the survivors will die. “That leaves a small percentage of birds of prey that hatch and make it to adulthood, like 7 percent,” Beran said.

The baby Barred Owl will be taken to a sanctuary and put in a flight pen where he will be taught to hunt. “It won’t be as good as his mom could have taught him, but he will be alive,” Beran added. Cole Hieronymus, the WCC videographer and editor, called the sanctuary to get an update on the Barred Owl’s status. Other than being treated for pinworms, the baby owlet is doing well.

Owls are an integral part of the Wildlife Command Center family. Beran has several owls of different species, and they play key roles in education programs, community events and in the entertainment world. Wildlife Command Center even has a Movie Animals division. “Rocky,” a beautiful Eurasian Eagle Owl, with large orange eyes, is known as quite the “diva.” He has been featured in several movies, television pilots and independent films. “Rocky” has become a favorite at photoshoots and at the St. Louis Renaissance Faire in St. Louis. Whether Beran is speaking to a group of veterans or Boy Scouts of America or community groups, everyone is drawn to the allure of owls. There are about 240
species of owls in the world, with 19 specific owl species found in the United States.

If you come across a bird of prey that needs rescuing, contact Raptor Rescue, Inc. at 833-FLY-HAWK. Let Raptor Rescue professionals make a distinction on if the owlet needs to be rehabilitated.