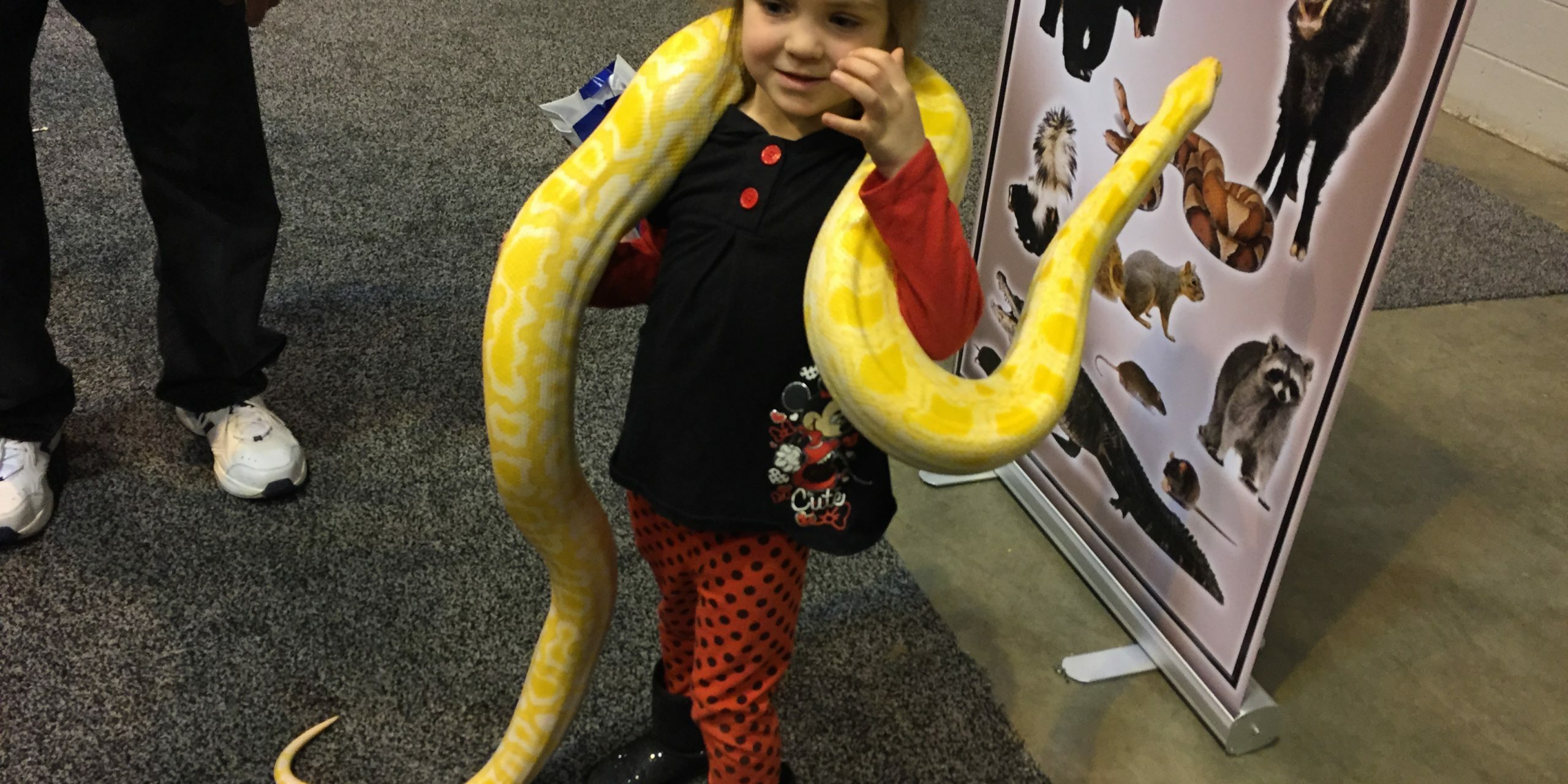 Knights, wizards, swordsmen, and hobbits stood in line along friars and courtly women in Medieval dress for an opportunity to hold “Goldie,” a lavender albino reticulated python snake, featured in the Wildlife Command Center’s area at the St. Louis Renaissance Faire.

“Goldie,” along with other pythons, and a Great Horned Owl, among a menagerie of other animals draw crowds at the festival. Michael Beran, owner of the Wildlife Command Center, with a host of technicians and volunteers help educate folks at the festival about the exotic and various animals in their petting zoo and exhibits.

In early September and running through October, folks will once again be able to pet a python at the Renaissance Faire and see the mysteries of a python unfold. However, a python of the Wildlife Command Center is often booked for community or organizations’ unique events or for parties. Beran has several types of pythons his company features. People are often mesmerized by the huge pythons slinking around Beran’s neck and shoulders.

Recently at the homebase, Beran walked into the reptile room to find the lock was off the the reticulated python closure and the 20-foot python named “Mama Lav” was missing. The snake is a white, albino tiger reticulated female python.

“As soon as I walked in through the door, I knew something was wrong. The lock was on the floor and Mama Lav was not in her cage. And the rattlesnake enclosure was knocked over. How does a 20-foot reticulated python hide from us?” Beran asked as he was searching behind cabinets.

Right before he found the large python coiled in a ball behind a cabinet, Beran spotted a rattlesnake peeping out from a work boot. Using a snake pole handler, Beran caught the rattlesnake and secured it back into its enclosure. And despite the huge python squirming and twisting, Beran was able to place “Mama Lav” back into her enclosure.

It was also time for “Mama Lav” to have a bath Beran said as he was getting a large plastic clean trash can set up for the soak.

“The first thing we do is tap our animals to let them know we are about to mess with them. Once she goes into a defensive coil, she’s a little bit easier to work with. Mama Lav has never bit me before. Usually this is a 2-man operation. She’s a big snake,” Beran said with a chuckle while wrestling with the python.

In the “tub,” Beran poured in about 20 gallons of water with a half cup of Betadine to create an antimicrobial environment for the python snake.

“This will kill any bacteria that’s on Mama Lav. If she stays soaking in it, it’ll easily kill any mites too. She likes the water. She’ll bathe from 6 to 7 hours. Whenever you put a snake in water, you have to make sure the water is the same temperature as the snake. If not, you will put the snake in shock,” Beran explains.

“Mama Lav” seems perfectly content to be submerged in the bath. Some snakes can hold their breath for more than an hour, Beran adds.

While the python is soaking, Beran plans to clean out her enclosure. Pythons can eat a full-grown rooster or 7-pound chicken all at once and will “swallow the whole thing.” After cleaning the enclosure, Beran checks the humidity in the enclosure.

“You always want to make sure your animal has the proper amount of humidity for their species. For our reticulated pythons, we try to keep humidity at 60 percent or above. For the Western Diamond Rattlesnakes, we try to keep their humidity very low, like less than 40 percent,” Beran notes.

Pythons are nonvenomous reptiles that are carnivorous animals that perceive their quarry through heat sensors on their faces.