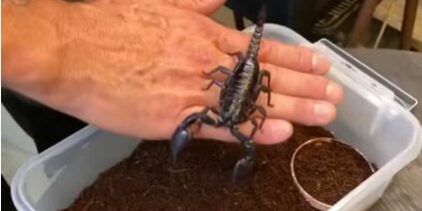 A shiny black Asian Forest Scorpion scurried across the sand in the terrarium. Michael Beran, the owner of Wildlife Command Center, fearlessly sticks his hand close to the scorpion which has large pincers and a stinging tail.

“He has not been worked with yet. He’s very pinchy. The Asian Forest Scorpions are more aggressive than Emperor Scorpions. Watch out for the pinchers,” Beran warns, but tapping on the scorpion’s pincers, nonetheless. After a few taps, the Asian Forest Scorpion pinches his finger. “Ouch!” Beran says but barely pauses. This particular Asian Forest Scorpion, new to the Wildlife Command Center animal kingdom, moves fast. Beran has not decided yet if he will add this scorpion to the other scorpions that are included in the WCC Movie Animals division.

Two of his large black Asian Forest Scorpions recently appeared in “Bloodthirst,” a postapocalyptic vampire movie. Beran himself has appeared in 57 films as an actor and stuntman and has served as an animal wrangler on multiple movie sets. “We like Asian Forest Scorpions for movies. They are pretty docile in the scope of all scorpions. These guys on a movie set become more docile very quickly. The pincers are worse than their sting.

The pinch is about like a crawfish or mudbug. The venom from a sting is about as toxic as a honeybee or wasp,” Beran says with a dimpled grin. This type of scorpion’s main toxin in its venom is chlorotoxin, a small protein that is only 36 amino acids long, Beran explains.

“The bigger the pincers, the less toxin the venom. This type of scorpion would rather use their pincers to get you than their stinger,” he adds. Cole Hieronymus, the WCC videographer, pipes up to ask Beran what would happen if the Asian Forest Scorpion were to bite him as it is crawling all over his hand and arm. It would leave a small bump where it stung me. The toxin would destroy a little bit of tissue,” admits Beran, who does not appear to be concerned about a stinging.

Many times, the antics of Beran interacting with his employees at the Wildlife Command Center in Missouri are filmed by Cole and may be viewed on the WCC YouTube channel or on YouTube Shorts. Recently, Beran challenged Gracie Stout, one of the animal care technicians, to hold the Asian Forest Scorpion. “Gracie, come hold the scorpion. Hand up. Look how much bigger he looks on her hand,” Beran says with a laugh.

Gracie urgently tells Beran to take the scorpion off her as it starts to climb her arm. Her bravery is captured on a recent YouTube video, as well as other WCC shenanigans.
There are roughly 2,000 species of scorpions in the world, with 90 scorpion species in the United States, which are abundant in semi-arid regions. Scorpions live mainly in deserts but have adapted to a wide range of environmental conditions. They can be found in all the earth’s continents except Antarctica.

“All scorpions have venom but only 25 species are deadly to humans. Asian Forest Scorpions have low toxicity,” Beran notes. On the WCC YouTube channel, the video called “You Ever Had a Scorpion in Your Pants?” highlights one of Beran’s Giant Hairy Desert Scorpions. While the sting is not that toxic, according to Beran, it can cause pain and swelling. In the video, Beran recounts a time when he was a boy watching a movie at a friend’s house and was stung by a Giant Hairy Desert Scorpion.

“It climbed up my pant leg and I started screaming. I took off my pants in front of my friends,” Beran recalls. These striped back scorpions can go sideways and pop you with the side of their stingers, Beran says. It is hard for the female Giant Hairy Desert Scorpion to find a mate. The female will usually eat the males and may not get inseminated.

“If the female scorpion eats the males, she will almost always impregnate herself. Asexual. After 9 months, there will be fully functioning little scorpions coming out,” Beran says.
The scorpion nymphs remain with their mother until they molt the first time. Usually, a female scorpion will give birth to 20 to 47 nymphs. When the scorpion young leave their mother, they begin to live on their own. In the wild, scorpions can live from 2 to 10 years. But in captivity, scorpions have lived as long as 25 years.
WCC scorpion