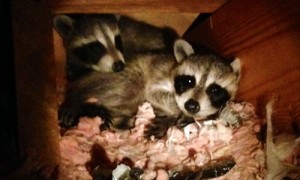 Call us at 775-800-4346 for raccoon removal in Reno, Nevada. Don’t let the cute cuddly look of these animals fool you, they can be very dangerous. Generally they tend to leave humans alone, although if a food source is nearby they can become dangerously comfortable around humans. They are disease carriers. They are considered to be the primary carrier of the rabies virus in the United States. They are also extremely territorial and will defend themselves viciously if provoked.

Raccoons can cause thousands of dollars in damage to a home or business in Washoe County if they decide to take up residence. They can tear off shingles and chimney caps to gain access. Once inside they will destroy insulation, eat food stored in cupboards, rip up furniture, urinate and defecate everywhere. They have even been known to turn on faucets and cause flood damage. That is often not covered under regular insurance policies. Raccoons have been known to break into poultry barns and pens. They have killed chickens and stolen eggs. They can cause immense damage to any structure they try to enter

Raccoons should definitely be left to the professionals! At Wildlife Command Center, we can remove them, repair the damage, clean and disinfect any areas where they have been and install measures to prevent them from moving in again!