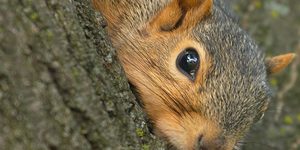 By Holly Jo Linzay
It was a day of foraging and nest building. Mom squirrel gathered leaves and twigs to build a comfy nest at the top of a chimney. The little squirrel snuggled in the branches deeper for a winter nap.

But suddenly, to his surprise and dismay, the squirrel tumbled down a dark tunnel. Luckily for him, he landed on his little feet at the bottom of the chimney. Some of the branches from the nest had fallen on top of him. Squinting his eyes, the little guy beheld a human approaching him. Twitching his fluffy tail, he frantically looked for a way to escape.
Michael Beran, owner and CEO of Wildlife Command Center, was on the service call.

“You never know what’s going to happen when you are dealing with a squirrel. No matter what kind of plan you make, you can bet the squirrel is not going to participate,” Beran said, as he assessed the situation with the squirrel.

Kneeling, Beran shined his flashlight and GoPro camera up into the chimney. On guard, the little squirrel hunkered down behind part of the fallen nesting material. Chittering with excitement, the squirrel leaped onto Beran’s shoulder, then his head. The squirrel started high-pitched squeals as Beran, bare-handed, grabbed the little guy.

“He’s not a baby, but not fully grown. He is still hanging out with his parents. He’s really strong, and could give you a good bite,” Beran said, with a big grin.

He took the squirrel outside and attempted to send him on his way, but the little squirrel would not take off. Beran decided the rescued squirrel would be taken to a rehabber until he could be released into the wild.

After he placed the squirrel in a cage, Beran gave the critter a nickname. He took “Charles” out of the cage and held him securely. “He’s not trying to bite me. He just wants to be warm,” Beran said, while stroking Charles’ furry head.

Purr-like happy sounds emitted from “Charles” as Beran placed the little squirrel in his uniform shirt pocket. “He’s a pocket squirrel,” Beran said with a laugh. He loaded the chirpy “Charles” back up in the cage to carry him to the Wildlife Command Center. The service call was deemed a successful rescue.

Squirrels can be quite unpredictable, Beran noted, especially when they are stuck in a chimney or have fallen into a fireplace. And he added, “You don’t want to leave a squirrel in your house as they can be destructive.”

About 40 percent of all house fires are caused by rodents that have chewed the plastic off wires and caused a short in the wires. Squirrels have four front teeth that keep growing. They can gnaw through wood, insulation and even chew through PVC pipes which can lead to flooding or water damage. Without exaggeration, Beran stressed, squirrels are quite possibly the “single most destructive animal” to a building. With their strong front teeth, squirrels are capable of chewing through thick walls to gain entry to homes or buildings and cause severe costly cosmetic and structural damage.

In late summer and early winter months, the female squirrels give birth to their pups. The mother squirrel will shred insulation and wood for bedding material. Wildlife Command Center often receives calls by homeowners with scenarios of baby squirrels falling from the nest built under chimney caps. Squirrels can be territorial and hard to get rid of once they set up their nests.

A squirrel infestation can create a pungent odor of urine and feces. The waste can be a source of disease to humans and pets, Beran said. The damage caused by the squirrels is often not covered by insurance. If you are facing a squirrel or rodent invasion, you need a professional.